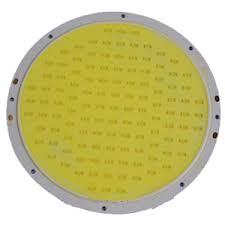 SMD remains one of the breakthrough LED technologies responsible for bringing LEDs from the low output DIP leds, to 100+ lum per watt power houses used in todays LED Lighting. SMDs use tiny ceramic cups to hold the waffern and phosphor in place, these cups can be mixed and matched into all types of lighting products.

Drawbacks of SMD; Each LED has a slightly different “white” and they must be “Binned” together. then thermal management issues (see diagram)

High brightness LEDs, usually covered with a drop of polymer (to focus and protect), are common in many of today’s LED Bulbs and Lights. Like SMD, they are a small point light source, and produce significant amounts of heat.

The Next Generation of LED, is without doubt; Multiple or integrated Chip, Referred to as MCOB (Multiple Chip On Board) or MCCOB (multiple chips and cups on board)

This new LED lighting technology comprises of many small “Gallium Nitrate” based crystals integrated into one large single chip.

COB (Chip on board) LED technology, differs from traditional LED in that instead of individual SMDs soldered to a circuit board and then mounted to a heat sink; the Wafers or “Wafern” are cut into some hundred small chips, with a thickness of only approx. 250 µm. These tiny small and hardly visible pieces of semiconductor crystal are bonded directly to the aluminum substrate (with a proprietary bonding procedure) allowing for optimum heat dissipation, and solderless fabrication.

Actual waffren are almost invisible to the naked eye.

The yellow discs are simply a phosphor coating, enabling complete control of color temperatures.This type of LED technology makes chip densities up to 70 chips per square centimeter possible, and promises to offer much more flexibility over other LED technologies.

As with all LED products however, the drivers and thermal management are the key to LED product longevity.

These are becoming more common in floodlights and High bay lights. They are cheaper to assemble than multiple single chips and so make products like high bay and floodlights much more affordable than multiple chips. The more well-known companies working on this technology are Bridgelux (USA) and Edison and Epistar (Taiwan).

MCOB is also found in LED bulbs and LED tubes, however compared to SMD surface mounted diode technology, MCOB technology is still in its infancy. 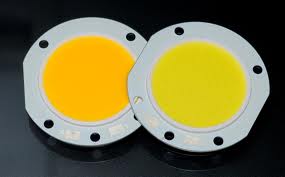