The Mercury lamp was the first kind of metal vapour light source that was mass produced for general lighting applications, and still today it remains one of the most popular discharge lamps produced globally. In Europe it has fallen out of fashion due to its relative inefficiency and rapid lumen depreciation by contrast with other light sources. However in the Americas and Asian countries its low system cost, long life and high colour temperature continue to make it a desirable light source for exterior illumination. Figure 1 illustrates the construction of a typical modern High Pressure Mercury lamp. 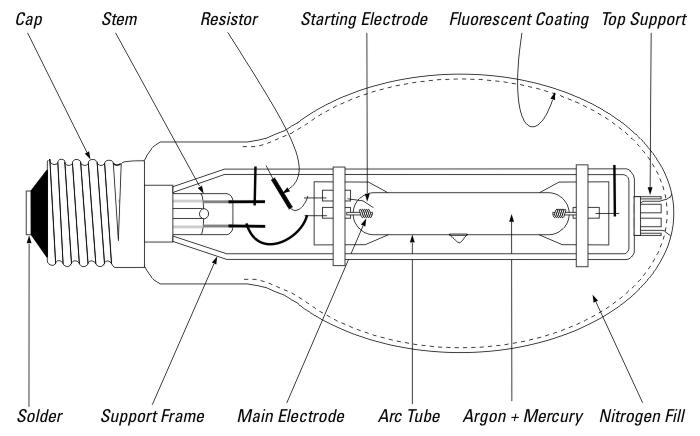 At the heart of the lamp is an arc tube which is fabricated from quartz, with a tungsten electrode disposed at either end. The tube contains a few milligrams of mercury and around 25-50 torr of pure argon as a buffer gas to carry the discharge while the lamp warms up, producing heat to vaporise the mercury and bring it into the discharge.

An auxiliary starting electrode is placed next to one of the main electrodes to facilitate lamp ignition. When the lamp is first energised the full open circuit voltage is applied across the arc tube. The distance between the electrodes is so large that the resulting voltage gradient is not high enough to cause ionisation of the gas filling. However the same voltage is also applied between one electrode and the auxiliary via a small resistor. The gap between these electrodes is much smaller, and the voltage gradient is sufficiently high that ionisation will occur. A small discharge strikes, the series resistor of 10-30kW limiting the current flow to about one thousandth of the normal lamp current. Once free electrons, ions and photons have been produced in the arc tube it is then very easy to strike a discharge across the main electrodes. The discharge quickly makes this transition because it can then bypass the starting resistor, and there is no electrical resistance between the main electrodes. Some lamps, particularly high wattage types often include two auxiliary electrodes, one beside each main electrode and connected via a resistor to the opposite end of the arc tube. This is also standard practice in mercury lamps designed for use in colder atmospheres.

Once the lamp has warmed up and the mercury is fully vaporised, the discharge operates in unsaturated mercury vapour at a pressure varying from 18 bar for the smallest types, to 2 bar for the largest. The arc emits the characteristic green, yellow and violet mercury lines and there there are also considerable amounts of invisible long-wave ultra violet at 365nm along with a broad range of shorter wavelengths. In the earliest lamps having clear outer bulbs this invisible UV radiation was completely wasted. Today the outer bulb is internally coated with a thin layer of a fluorescent phosphor which converts the UV into visible light, generally at the red end of the spectrum where the mercury output is lacking, to improve the colour rendering properties of this light source.

The outer envelope is filled with a nitrogen or argon-nitrogen mixture, or occasionally with carbon dioxide, both to prevent oxidation of the arc tube seals and to slow the rate of deterioration of certain phosphors. For low power lamps of 50 Watts and below, a vacuum or argon-rich atmosphere is employed by some manufacturers as it affords better thermal insulation, minimising conducted and convected heat losses which can become significant for such small arc tubes, and allowing them to run up to full intensity more quickly. Vacuum or at least reduced gas pressures are also employed in a special range of lamps designed for use in extremely cold atmospheres - again the object here is to provide better thermal insulation which allows the arc tube to warm up more rapidly. Heat-reflective coatings of platinum or gold are often also applied behind the electrodes of small or cold atmosphere lamps again to minimise heat losses and help them run up more rapidly.

By comparison with other common discharge lamps, mercury vapour sources have the lowest luminous efficacy. But during their 100-years of development, numerous changes in materials have taken place to ensure that a gain in performance has occurred every few years right up to the 1980's, when all further development for general lighting lamps effectively ceased. In 2003 however, a significant performance increase was made with the introduction of Philips' new HPL-4 lamp in Europe.

The technological progress in terms of luminous efficacy is compared with other light sources in Figure 2 below. Lumens per watt are only one aspect of lamp performance though, and mercury lamps do have other advantages to offer - principally their colour rendering properties are considerably better than most sodium products, and an extremely low system cost arising from the simple lamp design and basic control gear requirements secures them a market even in some of today's new installations.